Aganetha Dyck is a Canadian artist who is focused on addressing environmental issues which influences her unique art. One of her main focus is to raise awareness of the sudden disappearance of honey bees throughout North America and Europe. Dyck has spent almost a quarter of her life dedicated to illustrating the connection between humans and bees in her artwork.

Aganetha Dyck was born in 1937 in Winnipeg, Manitoba of Canada. She is grateful for her upbringing in the rural community because it helped shaped her creativity and independence. In 1972, her family of three children and husband moved to Prince Albert, Saskatchewen. During this time Dyck began to pursue her art interests at a local art center where she learned how to draw and carve wood. After enrolling in the Centre's batik, Dyck was approached by her instructor George Glenn and thought she had potential as an artist. In 1975, Dyck was offered to share an art studio space with Glenn to help her maximize her full potential. At this time, Dyck became seriously interested in the visual arts at the age of 38. 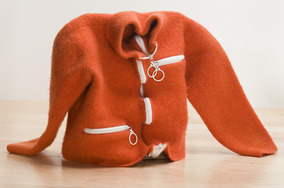 [Shrunken Woolen Garment]
Dyck's career had a slow start and did not know where she should begin. With the help of her instructor, Dyck began her work on what she knew best: housework. Before becoming an artist, Dyck was a full time housewife which consisted of: laundry, cleaning, cooking and other house chores. In her shared studio, Dyck began to do laundry by purchasing a second hand washing machine and clothing from a Goodwill store. She began to wash and dry woolen clothing until they would not shrink anymore. Dyck explains that her procedure was simple: go to work, fill the washing machine with hot water, a little soap and throw in a load of woolen garments (Mason). While the machine ran, Dyck would read books and before picking up her children from school she would hang-dry her soaking wet laundry till the next day. To her surprise, Dyck realized that the clothes had become tiny and stiff that could stand alone when placed on the floor. She was overjoyed to have created such incredibly tiny sculptures and continued this process for a year. She named the laundry project "SIZES 8-46" and was completed in 1981, "SIZES 8-46" consists of over 1,000 shrunken woolen clothes (Mason). This was the beginning of Dyck's career as a visual artist. 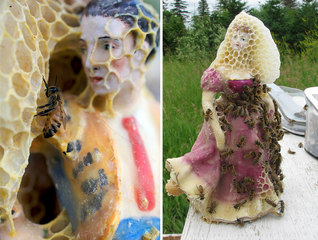 Her ongoing research raises questions about the consequences all living species would experience if honey bees were to be extinct.